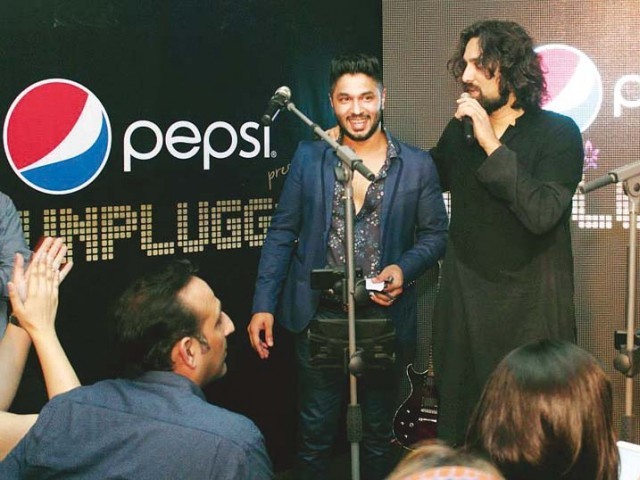 LAHORE: “It’s unbelievable that we are releasing an album on September 30 when no one else is even thinking about doing that these days,” said Ali Noor prior to Noori’s performance in Lahore on Sunday.

The event seems like the answer to the lack of platforms for local musicians to play live music. It was a part of Pepsi Unplugged; a show that aims to encourage creative freedom for artists by providing live performance opportunities. The show has previously featured the likes of Club Caramel, Jal, Zoe Viccaji and Komal Rizvi in its Karachi spree of shows.

A local café, where the event was taking place was jam-packed by 9:30pm and by that time there was no room for people to move around. Although the concert started a little late, Noori fans stuck around till the very end.

They also performed a cover of Hookah Bar, along with their rendition of I’ve Got A Feeling by the Black Eyed Peas which got the crowds cheering. Pinjra and Hoshiyaar, two songs from their upcoming albumBegum Gul Bakaoli Sarfarosh were also included in the playlist.

The crowd was incessantly requesting the band to play Manwa Re, to which Ali Noor said, “bhool gaya hai yaar ab nai bajana aata” in his quintessential manner. This was followed by an improvised version of the Nusrat Fateh Ali Khan classic Sanu Ek Pal which left the crowds elated, but it did not stop them from requesting to play Manwa Re the song that made it happen for Noori. They fulfilled the crowd’s request at the very end of the show.

Talking about the future ventures, Hasan Rizvi, the organiser of the event and the CEO of Body Beats shared that they plan to broaden the scope of the show.

“We plan to take the show to Dubai in 2016 and the lineup will include Zoe Viccaji, Komal Rizvi, Club Caramel, Jal, Noori, Ali Azmat and one more artist, who we are yet to finalise. For Pakistan, we plan to bring in Indian artists to create mash-ups with our local stars.”

The next Pepsi Unplugged session is set to take place on September 20 and will feature Ali Azmat.